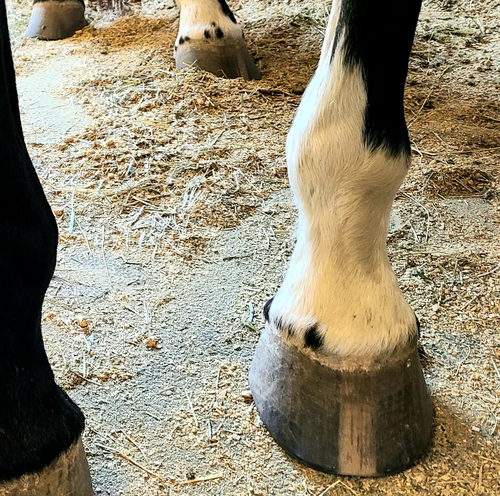 “Navicular” is a diagnosis that nobody wants to hear. The prognosis is often poor, resulting in full or partial retirement of the horse. It is usually associated with front foot pain and damage to the navicular bone, deep inside the hoof structure, and any of a number of structures around it (Figure 1). But what if there was a way to prevent it through training? A promising review paper on navicular syndrome crossed our desk: The Equine Navicular Apparatus as a Premier Enthesis Organ: Functional Implications by Osborne, Blas-Machado, Cornille, and Uhl. In line with ESF’s mission to prevent lameness, the authors of this review paper think prevention is possible through precision training.

What is a review article and why is it important?

Review articles are not new science, but they summarize published scientific studies and can produce new ideas and recommendations for future research. Thus, they can be useful agents for change.

Key points for riders and trainers:

The article defines Navicular Syndrome as

“characterized by chronic, progressive lameness associated with caudal heel pain and the degeneration of the navicular bone and its surrounding structures,”

“over time, the specific name for this syndrome has changed from navicular disease to caudal heel pain, to palmar foot pain, to podotrochlosis/podotrochlitis.”

The diagnosis is generally bad news, but the upside is that there is a proposed rehabilitation and prevention strategy. Instead of looking at each structure separately, the authors’ proposition is to consider the navicular bone and surrounding anatomical structures as one enthesis organ. They point out that a precedent for this re-framing is already defined in human anatomy around the Achilles tendon. Definitions will help at this point.

Enthesis Organ: a group of structures which, in the case of the navicular enthesis organ, includes the following: 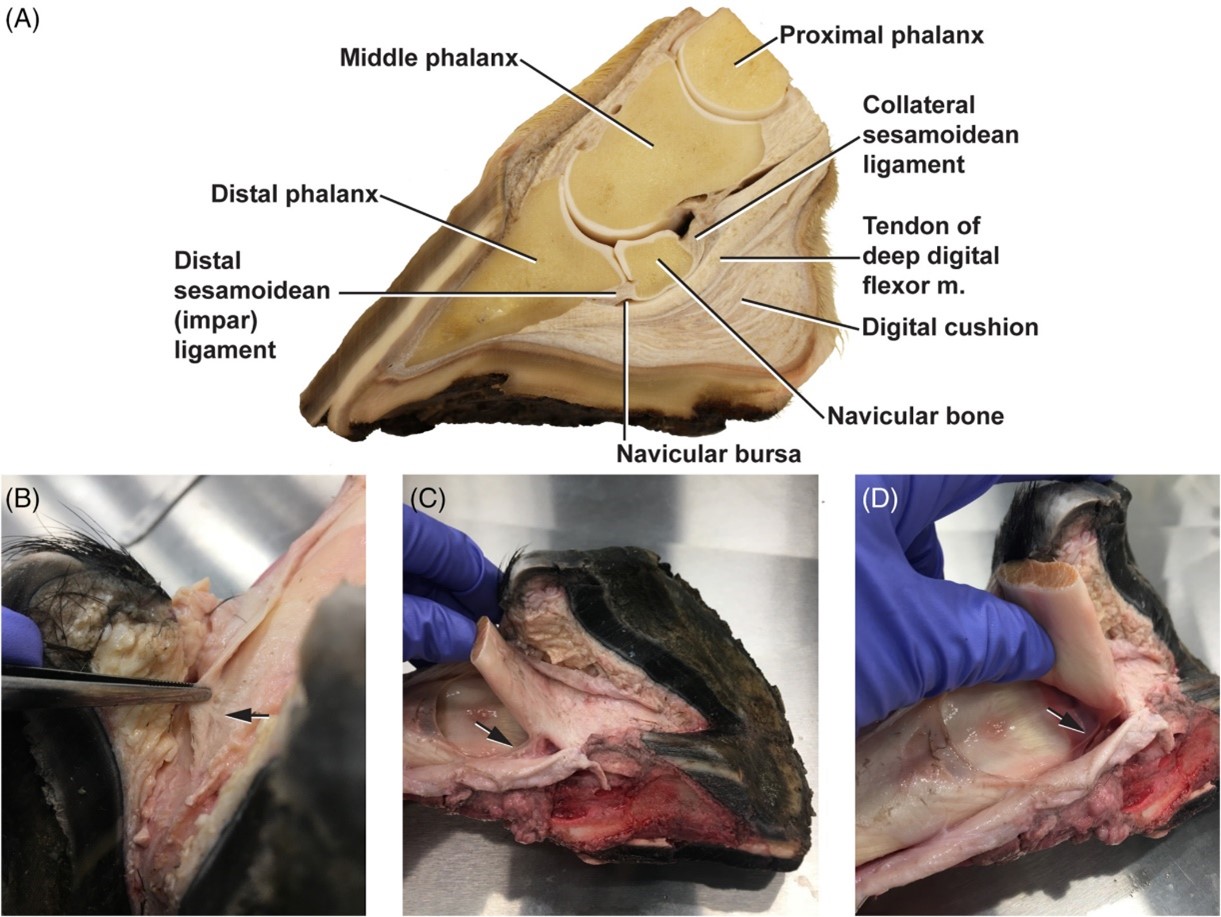 Forces do not just enter an anatomical structure and evaporate, they are transmitted through, or absorbed by attachments and surrounding tissues, so it makes sense to examine the adjacent structures. Instead of looking at the damage to each structure and seeking a mechanical root cause for each, the authors are looking at one distinct and definable loading condition that affects a group of adjacent structures of the distal limb. This lends itself to a prevention and rehabilitation strategy since the particular loading condition can be corrected by training. It is important to note that the term loading implies not only the magnitude of force but also the direction of the force. The following describes the way a horse with navicular syndrome was fully rehabilitated, without the use of corrective shoeing, surgery or painkillers, to the prior level of performance:

“This correction was primarily achieved through slowing down the movement until there was a slight pause between the placements of each foot at the walk and improved synchronization of the trot. Such slow movement causes the contractions of the spinal and the extrinsic muscles that attach the thoracic limb to the thorax to become isometric, thereby building up strength with little risk of damage to joints and soft tissues. Building muscles in this way compensated for loading forces, which led to elevation of the thorax, improved body balance, and thus correction of the forelimb kinematic abnormality that was compressing the navicular enthesis.”

Simply stated –get the horse off the forehand, and pain killers, surgery, and corrective shoeing are not needed. But, part of the problem is defining “on the forehand”, and it may not be what is commonly accepted. The authors’ definition of the overloading condition:

“As it (the horse) moves forward, the propulsive phase in which the foot lifts off the ground is delayed, occurring behind, rather than in front of, the rider's leg. This causes the leg to pass the vertical and become hyperextended just before heel off, creating a pathological position of the foot that has been shown to compress the structures of the navicular enthesis organ.”

This provides visual cues, however, as the authors stated, it needs further development. What an observer would look for during motion is the position of the front foot under the horse’s trunk relative to the rider’s foot. Most often we see the horse’s foot still flat on the ground (meaning “heel off”, when the heel begins to leave the ground, has not occurred yet) further back than the rider’s foot, and according to the authors, this can lead to navicular syndrome. In the figures 2 through 5 below, each image depicts the same horse at different times during one ride. Horses, (unrelated to this review article,) range from Grand Prix dressage stars to trail horse and represent a wide range of conformations. We examine the heel-off location at different times during the performances or training sessions. 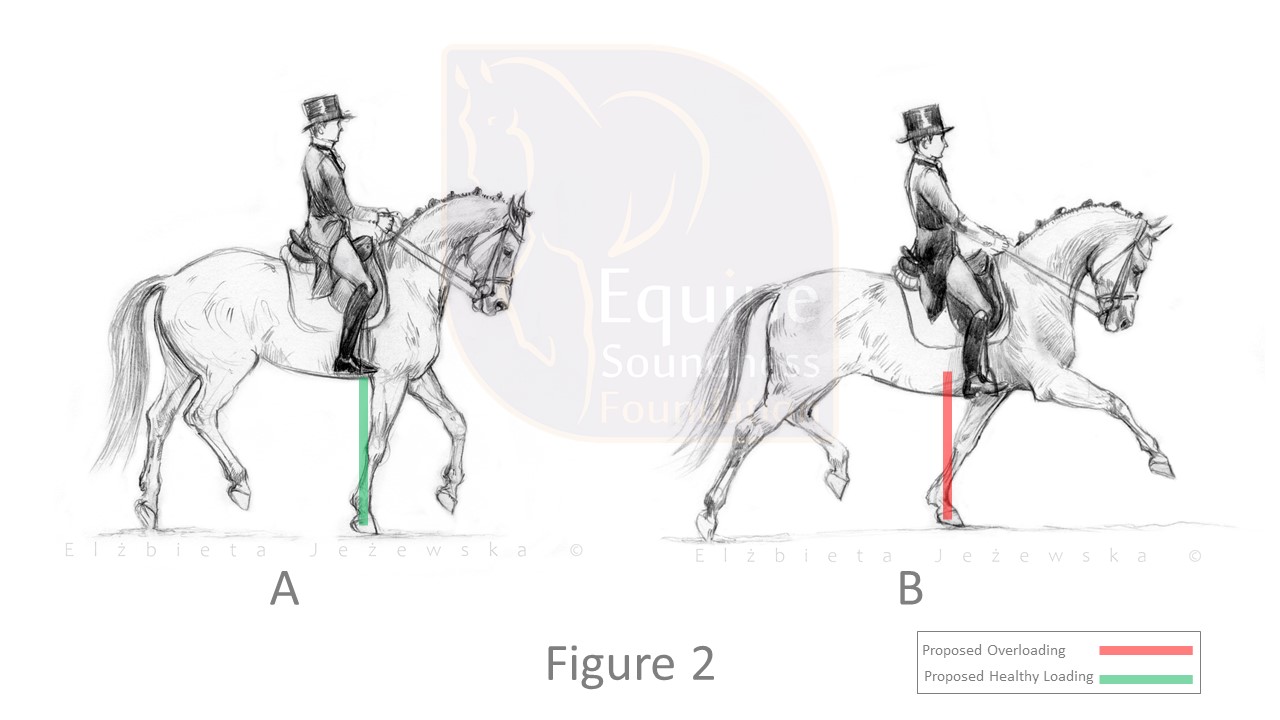 The sketches were inspired by video of a single performance by a top Grand Prix dressage horse during competition. On the left (A), “heel-off” occurs approximately below the rider’s leg and on the right (B), “heel-off” occurs behind the rider’s leg. A is collected trot and B is the extended trot. According to the description in this review article, this collected trot, on the stride shown, is not producing an overload condition, but the extended trot is producing the proposed overload condition. 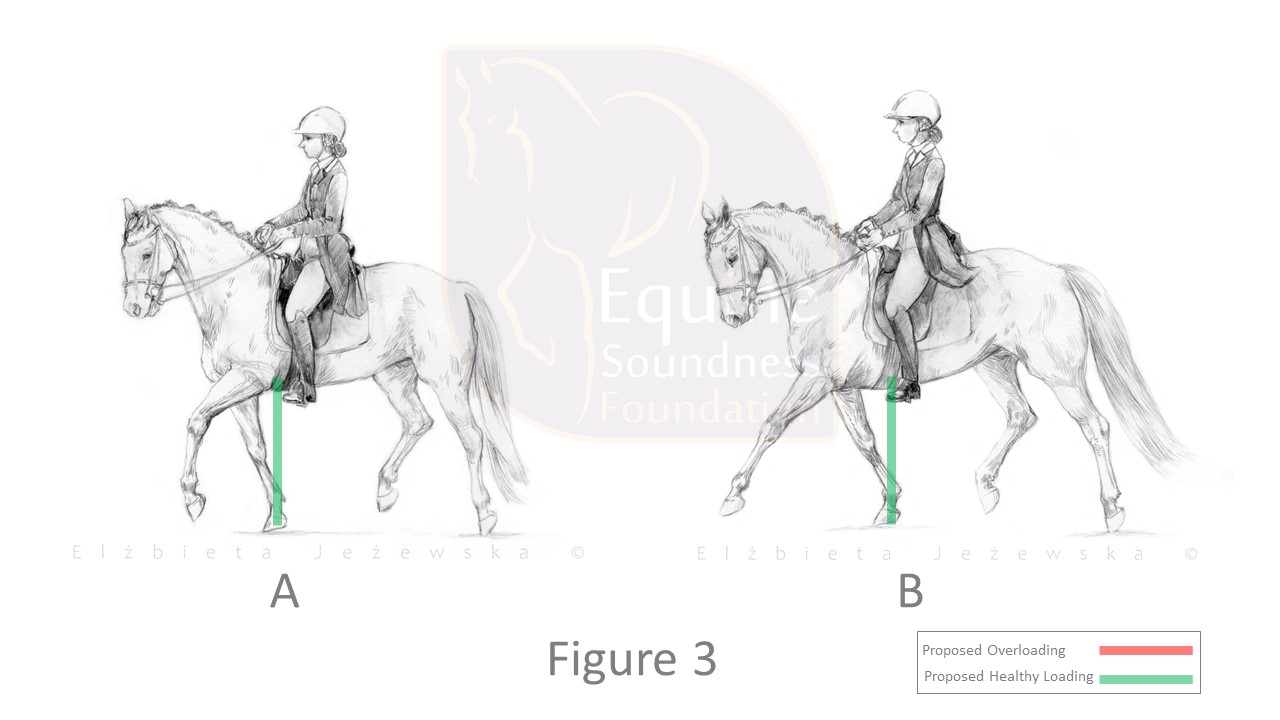 The sketches were inspired by video of a single performance by a top Grand Prix dressage horse during competition. On the left (A), collected trot, “heel-off” occurs approximately below the rider’s leg and on the right (B), extended trot “heel-off” also occurs approximately below the rider’s leg. In this case, both the collected trot, and extended trot are not producing the proposed overload condition. 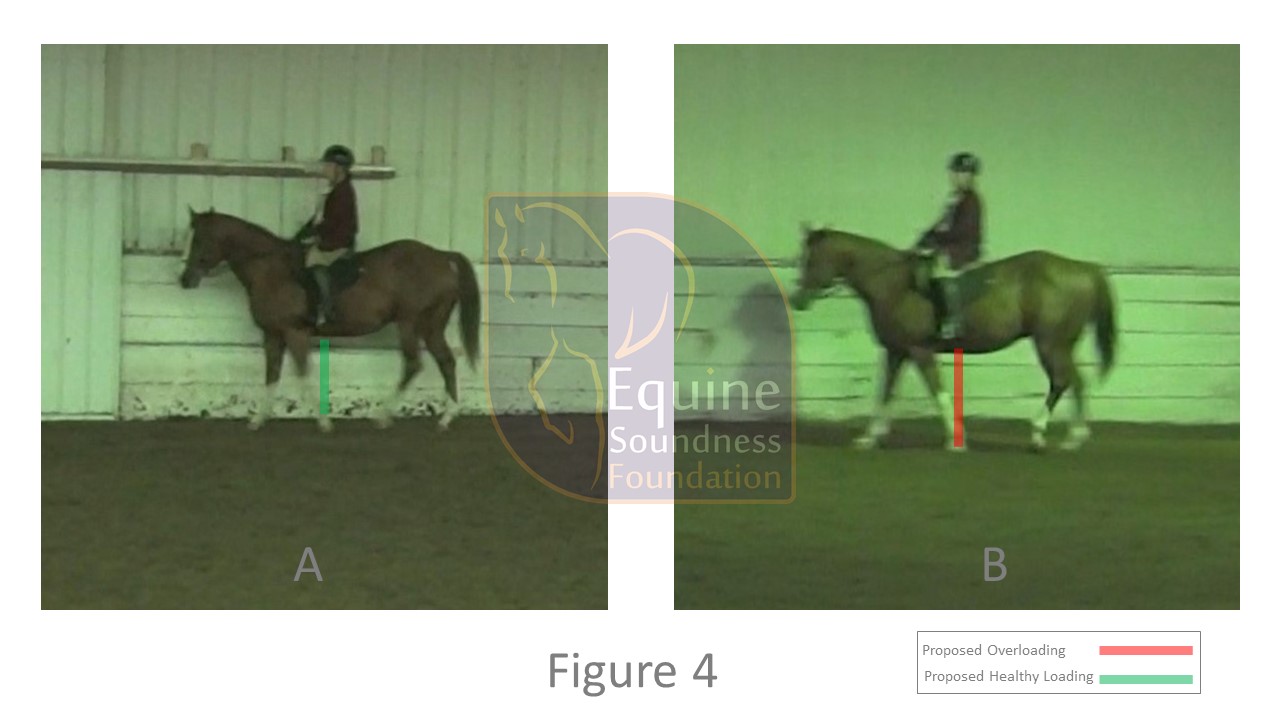 Both images are screen shots (used with permission from the rider and horse owner) from video of a single ride by a novice rider on an ordinary pleasure and trail horse diagnosed with navicular disease. Walk is shown. The rider is being instructed to teach the horse to unload the fore limb. On the left (A), “heel-off” occurs slightly ahead of where it occurs on the right (B). This horse has short upright pasterns and therefore has a smaller range of motion to work with than an elite dressage horse in Figure 2. Note that on the left (A) the horse is slightly after heel-off where the knee begins to bend during breakover. This is because it was not possible to stop the video fast enough to capture “heel-off” more precisely because when the fore limb was under less load, it sprung off the ground faster. Actual “heel-off” would be slightly more forward. This horse has remained sound in ridden work for 7 years after the video was recorded. Another thing to note is that hind limb engagement improves when the horse is not overloading the fore. 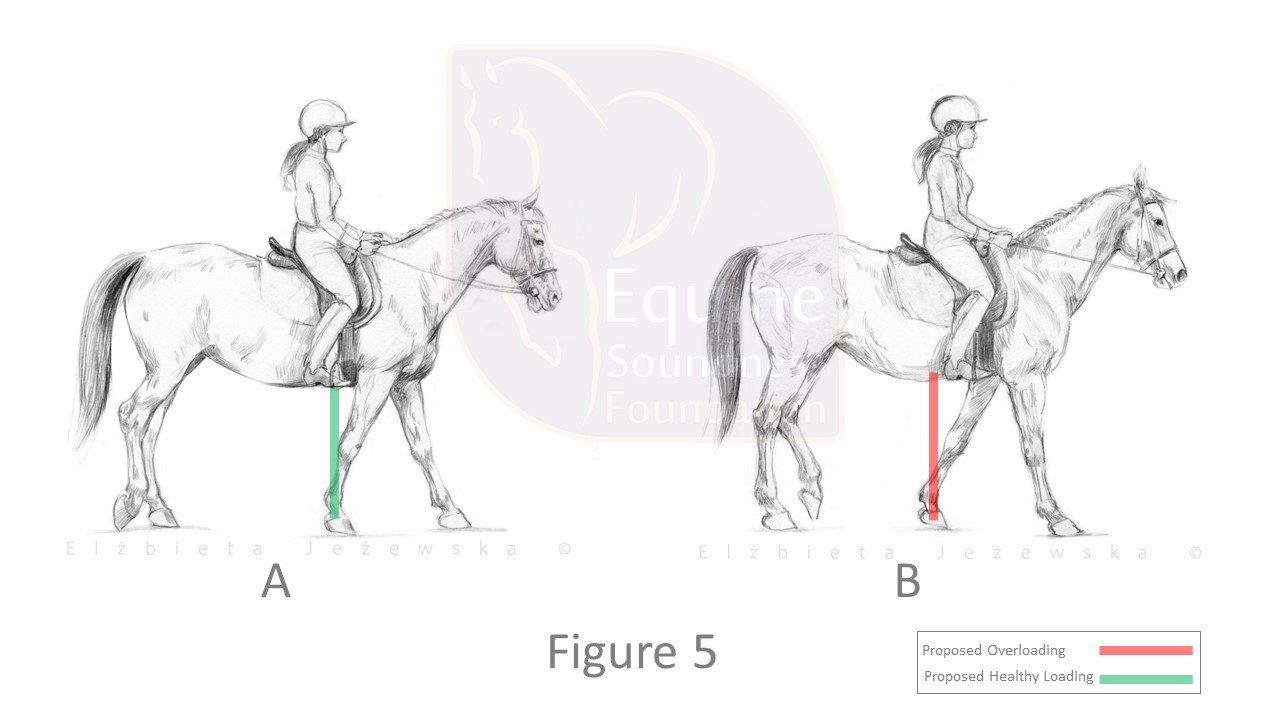 The sketches were inspired by a clinic video. In this sequence, the trainer is riding a client’s horse and is intentionally teaching the horse to unload the fore limb. On the left (A), “heel-off” occurs slightly ahead of where it occurs on the right (B). This degree of correction was achieved in minutes time.

Figures 2 through 5 show that a horse who overloads the fore at one moment can create movement that is not overloading the fore at another moment. These images also demonstrate variation in visual appearance among many different conformations at, or close to, the moment that the heel leaves the ground.

These images should lead to the realization that the kinematics that can precede navicular syndrome are very commonly present in ridden horses, which explains why this painful condition is not that rare.  Additionally, it should be clear that a high-level dressage horse can perform in a manner that does not result in the overloading condition and still be competitive.

An important point to make is that the rehabilitation process is not going to be the same for every horse. The authors warn

“It should be emphasized that while this type of therapy has great potential, by definition, it is not “one size fits all” (i.e.”do this one standardized exercise and the horse is fixed”). Rather, just like successful physical/occupational therapy in humans, it requires involvement of trainers and owners working under supervision over a period of time to tailor the mechanical therapy to each horse's specific needs in the context of its athletic function.”

Why is mechanical cause and prevention approach not already the widely accepted practice?

According to the authors,

“This persistent focus on bony structures may originate with a traditional view of anatomy that is underpinned by comparisons with architecture and engineering.”

This idea also appears in Graham Scarr’s book Biotensegrity: The Structural Basis of Life. The authors proceed to use very basic engineering ideas to discuss loading and unloading as a remedy. Possibly a more accurate way to convey this idea is that the use of simple structural models without the appropriate backdrop of knowledge in mechanics, dynamics, material properties etc., is insufficient. It can, and often does, lead to incorrect conclusions. Simplified models only work when there is a depth of knowledge enabling one to understand what is not illustrated. It is unlikely that an architecture or engineering program would omit consideration of adjacent parts and attachments in the root cause failure analysis. Yet, treatment of pain, rather than eliminating the source of the pain, is still the prevailing approach we see in lameness treatments.

Overloading of the fore limb is relatively easy to see.  Does one overload event (one step or one jump landing) cause damage? Common sense dictates that generally it does not. Is there a threshold succession of events at which the formation of pathology begins? It seems more likely that habitual overloading is what will lead to lameness. These are questions that need further research.

It is known that blocking nerves eliminates signs of pain, such as head bobbing and facial expressions of pain, but what does this do about the source of the pain? The authors of this review article go a step further and address mechanical overloading that logically would be a source of pain, and the result is positive.

Could the whole-body mechanics approach for rehabilitation and pre-habilitation of navicular syndrome be a starting point for addressing mechanical causes for other common lameness issues, such as kissing spines, hock and stifle osteoarthritis, and suspensory ligament damage? Will riders and trainers be willing to modify their approach to training? The review article sets forth a proposed definition for overloading of the fore limb, which may be new to some equestrians, and the resulting gaits will surely look different from what is popular. Can the equestrian community accept a different gait appearance in favor of lameness prevention? Or, will tradition and lameness prevail?